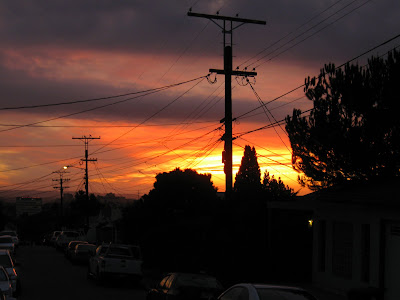 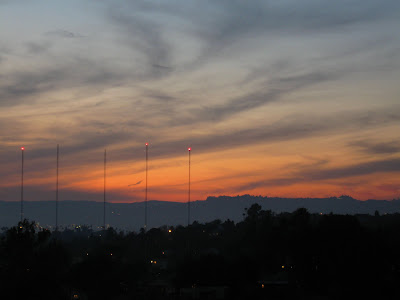 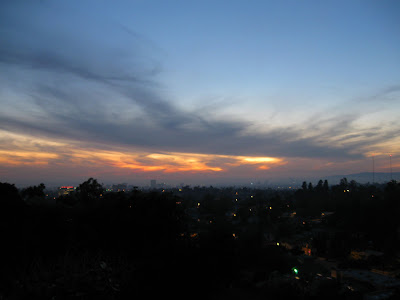 Posted by Chapmaster at 12:00 AM No comments:

This is NOT me at a recent surfing lesson.
Posted by Chapmaster at 8:15 PM No comments:

Lifecycle of the pier 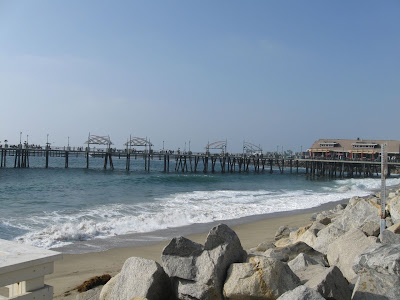 There were a lot of people fishing off of the Redondo Beach pier when I visited the other day. 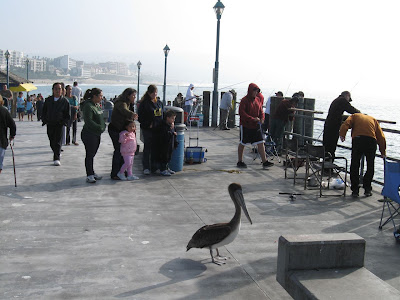 Some big pelican-type birds were hanging around, ready to swoop in and get any stray fish scraps. The roof with a bunch of the birds sitting on top of it was right next to the sink/table where people would gut and filet the fish they caught. 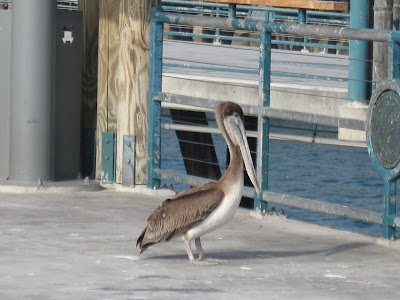 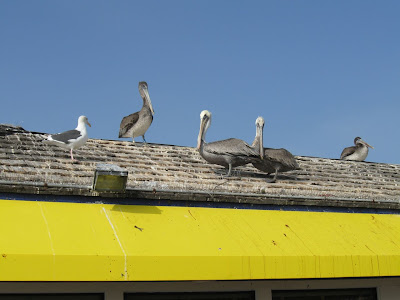 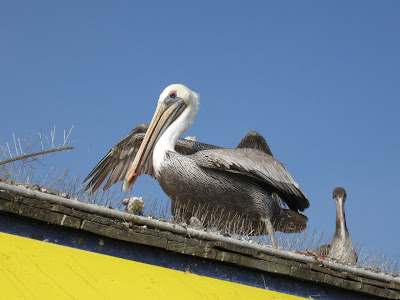 There were lots of seagulls hanging around to get bread crumbs and stray bits of popcorn and ice cream cone dropped by all the tourists and kids watching the fishermen and pelicans. 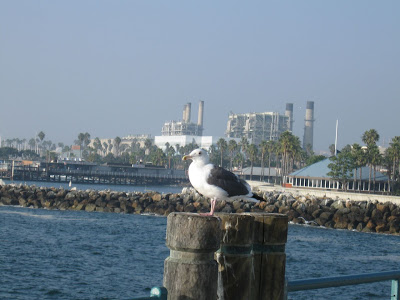 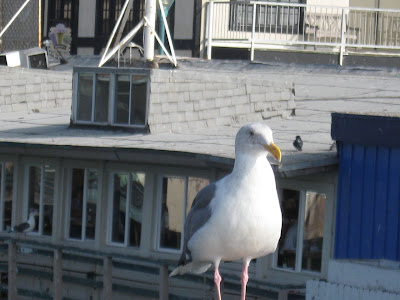 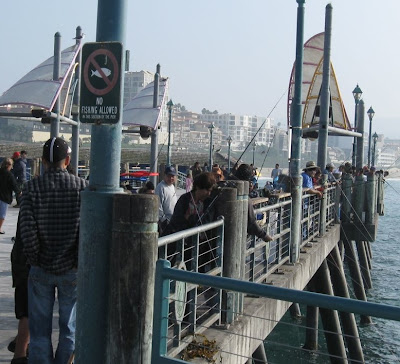 (look at the sign)
Posted by Chapmaster at 12:36 AM No comments:

I was only in France for a few days last fall/winter, but Paris had a lasting impression on me. In doing a crude assessment of my ancestry, I've determined that roughly I am equal parts French, German, and Irish...and then a bunch of other stuff. During the first 26 years of my life I had never embraced my French heritage. I think this is partly because I could never pronounce any of their words (what's up with all the silent consonants?...coup, hors 'd oeuvres, Mardi Gras, etc...) and partly because of that post-9/11-freedom fries thing.
So when I decided to study abroad in Ireland for the Fall 2008 semester, it was more of a coincidence/convenience that I had the opportunity to spend some time in the City of Lights. My law school friends Tom and Marine were already in Paris working for the summer, and my friend Thomas was starting his study abroad program in Paris a couple weeks before my program in Ireland was set to begin. So this gave me a perfect excuse to go to Europe early, see the sights of Paris, and not need to know how to speak any French.
I ended up spending 8 days in Paris...5 in early September and 3 just before Christmas on my way home. I liked Paris much more that had expected. I've blogged about a couple of my favorite things already... http://www.chapmaster.com/2009/04/canal-saint-martin.html and http://www.chapmaster.com/2008/12/paris-weekend.html for example.
But one thing that I enjoyed most was French music. I loved it...even though I don't speak French. Since I didn't know what was being said/sung, the songs that really stuck with me weren't necessarily ones that I'd like if I were a frenchman or understood the lyrics. Just ones that sounded good to me... In fact, when I later told Marine about the songs I liked and asked her for the artist's names, I could almost hear her laughing all the was across the Atlantic. According to her, one song was for teenage girls to like, one was for old people to like....etc.
Nevertheless, you like what you like, so like a German who (inexplicably) loves David Hasselhof, here is my decidedly "uncool" list of favorite French music:
Cristophe Mae, "Mon p'tit gars"
http://www.youtube.com/watch?v=Ppi5RMpKOOM
This is the song which apparently was popular with the teenage girl crowd recently. It sounds like a pop-py love song but he's actually singing about his baby son. I heard this song on the radio at an internet cafe and had Thomas (who speaks French) write down some of the lyrics so I could find out what it was.
Michel Polnareff, "On ira tous au paradis"
http://www.youtube.com/watch?v=GPMKh2J9Er0&feature=related
On my last night in Paris before returning to the U.S., a group of us went to a sing-along at a local hole-in-the-wall bar. The place was packed...Christmas was less than a week away, the tiny bar was lit up with old-style Christmas lights, and of course good wine was flowing. There was a Bob Dylan-esque man with a guitar leading everyone in song...singing mostly folky French standards. Even though I don't know any French, it was fun to try and sing along and enjoy the festive mood. I liked this song so much I wrote down some of the lyrics to find it later. I'm not sure about the kazoo intro. As you can tell, it is great for singing along. The title is loosely translated at "Everyone will go to paradise/heaven."
Edith Piaf, "La vie en rose"
http://www.youtube.com/watch?v=rKgcKYTStMc
I heard this song first in Thomas' apartment at at going away party. The song is part of the "French Dinner Party" playlist on iTunes. I think the music sounds quintessentially Parisian. Edith Piaf is regarded as France's greatest popular singer. According to Wikipedia, legend has it that she was literally born on a street...onto the pavement...in Paris. She was abandoned by her parents at an early age, lived on the streets and in a brothel during her early years, performed as a "street acrobat" with her father, and gave a commission (paid out of her singing proceeds) to her pimp boyfriend so that he wouldn't force her into prostitution. It's amazing that such a beautiful song can come from a person with such a troubled life. (Mind you, I have no idea what the words mean...at least they sound beautiful.)

Maurice Chevalier, "Ca sent si bon la France"
http://www.dailymotion.com/video/x22zta_ca-sent-si-bon-la-france-maurice-ch_music
This song was also on the iTunes "French Dinner Party" playlist. Maurice Chevalier is where the stereotypical "huh-huh-HUH" image of a frenchman comes from. This song reminds me of French merriment. It is ironic that the only video version of this song I could find is set to images of rioting in Parisian suburbs. Oh well, you take the good with the bad. As a side note, I found that listening to the iTunes "French Dinner Party" playlist was perfect music to listen to while writing my seminar paper and studying for the bar exam earlier this year. I had no idea what the words meant because they were in French and it was lively enough to keep me awake.
Posted by Chapmaster at 10:45 PM No comments:

Here is a homeless man crossing the street in Echo Park LA with all of his earthly possessions. 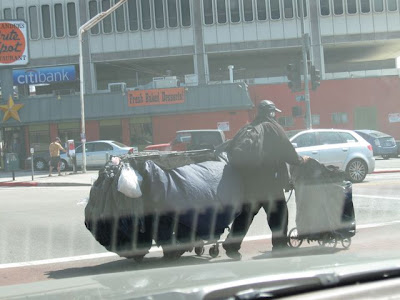 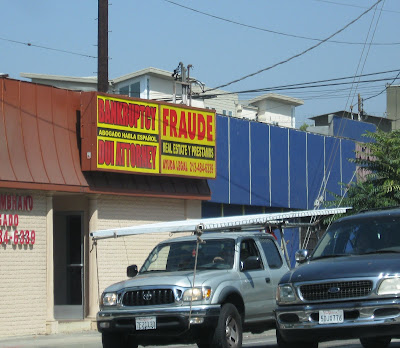 would you hire a bankruptcy/DUI attorney who has "FRAUD" emblazoned on the front of his office?
Posted by Chapmaster at 10:16 PM No comments: 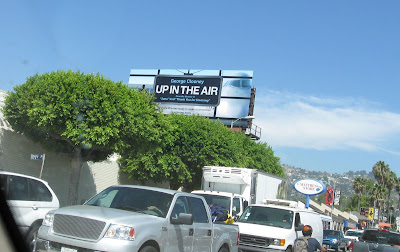 This is a billboard I spotted the other day in Beverly Hills advertising the new George Clooney movie "Up in the Air." They filmed alot of the movie in St. Louis. Back in March I was an extra in a scene. It was a really cool experience to see how everything worked "behind the scenes" and to see George up close. I signed some agreement promising not to reveal any details of the movie or the filming...but suffice it to say that there is probably about a 25% chance that my face (or the back of my head) will flash by briefly in the background of one scene. Pretty sweet, huh?
I'm very excited because this represents the start of my acting career. One thing I've noticed is that every other person you meet out here is in "the business"...(the entertainment business). For example, on my first day out here I met an animator/puppeteer on a Cartoon Network show. On the first day of work I discovered that my co-worker's cousin is a famous movie star whose husband is in a sitcom. Last summer when I was out here I met an actor who appeared in several episodes of "Dallas," "Charlie's Angels" and the "A-Team," and voiced one of the dinosaurs in "The Land Before Time." I haven't spotted any celebrities around town yet...
I don't actually want to be an actor of course. The closest I've gotten to starring in a show was when I operated the curtain at my 8th grade talent show. I don't think I would mind being a model...but I wouldn't want to know when people were taking pictures of me. It always seems like my pictures turn out better when I don't know they're being taken. Another requirement would be that I would already be in the physical condition required for the modeling job...no extreme fitness plans, no drastic wardrobe changes, no posing. I guess all I really want is to get money for people taking pictures of me as I go about my business in my natural habitat--like a zoo animal but with better legal representation.
(Yes Thomas, I know that zoos are unnatural, unhealthy habitats in which animals are held captive, enslaved for human enjoyment and curiousity. If I could personalize this blog, I would substitute the word "safari" in place of the word "zoo" in your edition.)
Even though I don't want to be actor, I'm sure my role in the Clooney movie will pay off in other ways. Of course it will make for interesting bar conversation, improve my street cred and impress chicks...but I really want to appear in the movie so I can put it on my resume. Ideally I'd able to provide the exact time of my appearance or even attach some still shots of the scene. I could put a photo of my performance on the reverse side of my resume. Or better yet, I could just print my resumes directly on the back side of a photo of me and George Clooney.
The movie should be released in late November or early December...I'll be sure to let everyone know if I'm in it!
Posted by Chapmaster at 11:58 AM No comments: 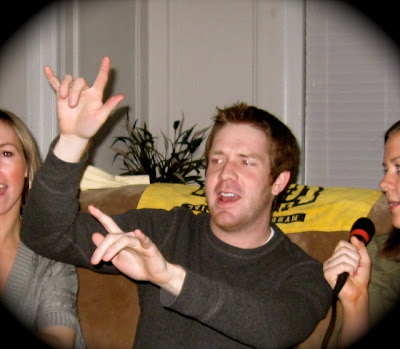 Not surprisingly, I defeated Andrew last week in our fantasy football league. This week I'm facing a team that is 0-3, so I feel like I have a pretty good shot at having 2 wins in a row.
Posted by Chapmaster at 10:52 AM No comments: 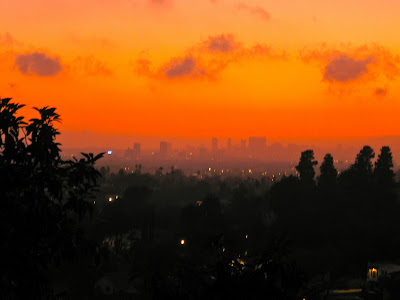 Rising out of the mist, you can see the skyline of the famous, mythical Century City. Er, well, maybe not famous or mythical, but it was a really cool sunset.
Posted by Chapmaster at 12:43 AM 1 comment: