I'm back in the USA!!! But before coming home, I stopped in Paris for the weekend and stayed with my friends Thomas and Sheridan. 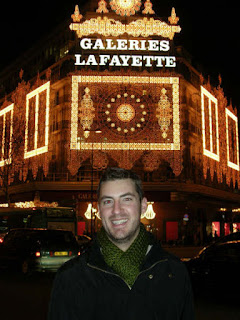 This department store had really cool Christmas lights and festive window displays. Here I am with my Paris-scarf outside. Apparently some leftist group planted bombs in the store earlier in the week creating a big commotion, but they didn't explode and I couldn't understand the French news reports, so I was none the wiser. 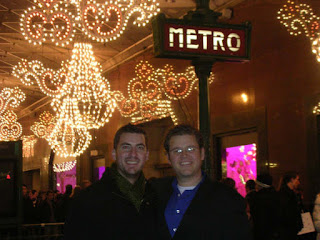 Me and law school comrade Thomas. 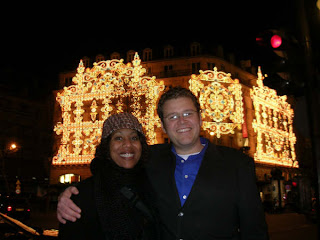 Thomas and his lovely wife Sheridan. 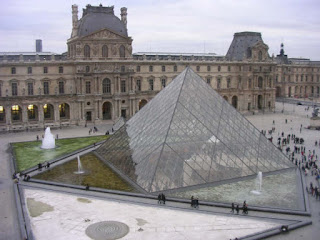 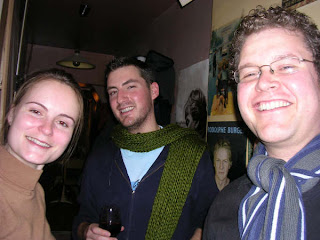 Thomas and I were literally the only two human beings in Paris not wearing/owning a scarf. So I went out and bought one, while Thomas got one as a going away present from his classmate Christine. 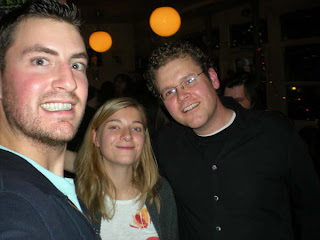 Thomas, classmate Marine and I at a sing-a-long bar in Paris. There was a really good singer/guitar player leading us all in singing the French favorites. I was possibly the only one who didn't know what was going on because 1. I don't know any French songs, and 2. I don't read French so I couldn't follow along in the songbook. However, it was still really cool to be in the packed bar with everyone, united by the wine and the songs. I was happy to discover that after having a few glasses of wine, my French singing skills drastically improved. 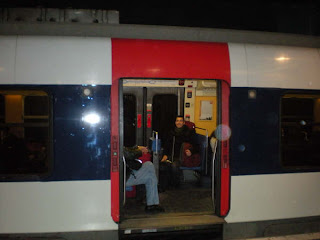 That's me on the train to the Paris airport. I made it back to St. Louis 18 hours later. The worst part of journey was having to sit through the showing of the animated movie "Wall-E" on the plane. Of course I made a mandatory stop at Taco Bell on the drive home.
Posted by Chapmaster at 7:11 PM