It was a busy weekend of travel around Ireland. Here are a couple of pics hot off the press... 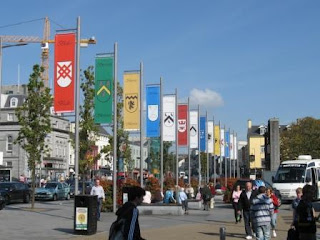 On Friday we took a bus to Galway which is on the west coast of Ireland and known for its traditional Irish music.

The next day, Andrew and I took a bus tour through the Burren and to the Cliffs of Moher. 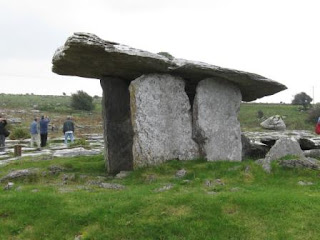 The Poulnabrone portal tomb is one of the best preserved megalithic tombs in Ireland. It was built during the New Stone Age, around 4,000 BC, give or take a few years. The unique rocky landscape is characteristic of The Burren, which has more than 90 megalithic tombs. 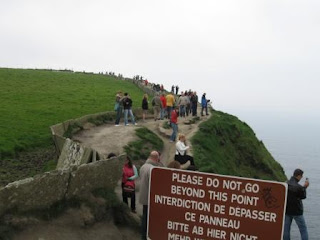 The Cliffs of Moher are a stunning part of the western coastline, where the Irish country side abruptly drops off several hundred feet to the Atlantic Ocean below. The weather was very gray and dreary, but the site was still one of the most awesome things I've seen. The Cliffs of Moher is one of Ireland's top tourist destinations and, as this picture demonstrates, draws many people who do not like to obey posted signs.

After a relaxing Sunday, we traveled on Monday to the southwestern town of Killarney. We rented bikes and rode around town and the Killarney National Park. 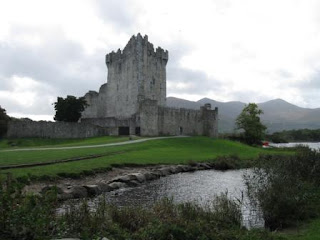 Ross Castle was built sometime in the late 15th century, by the O'Donoghue family who ruled the Killarney area at the time. Lough Leane is in the foreground, some Irish mountains are in the background.

The shot 9/30/2008: Here, Andrew puts on a wool sweater jacket he bought in Killarney. He arrived in Ireland without a coat or sweater and complained quite loudly about being cold for two weeks. Each time, I suggested he go to T.K. Maxx (yes, the Irish version of T.J. Maxx) and buy a cheap jacket for 15 euro...that way he could keep warm and shut up.

Each time he scoffed at the suggestion and said his jacket was being shipped from the U.S. and he didn't want to spend the money. Thus he spent the first two weeks in Ireland cold and complaining loudly in my ear. The package with his U.S. jacket finally arrived here on Saturday. So, using classic Andrew logic, he promptly went out the next day and bought a brand new jacket for much more than 15 euros. This is today's moneyshot because it proves that I was right for two weeks and he was wrong. This is sort of a "you-had-to-be-there" thing, but just rest assured that I was right... 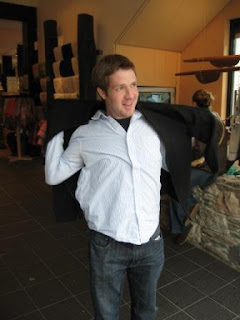 Posted by Chapmaster at 7:00 PM

To my defense- it is a really sweet sweater/coat.

First of all Smith, it's "In my defense". Second, this is an instant classic. Impulse buy of an item that you are close to getting for free. Classic.