And you thought you had a strict father...

After making last minute reservations at a local hostel, Andrew and I aimlessly wandered around Galway for the better half of an afternoon while Tom went fishing and hobnobbed with street performers. We were on a deserted side street when I spotted a creepy skull and crossbones carved into a wall. It appeared to be part of some sort of memorial, but the descriptions carved into the stone were faded and discolored, so it was impossible to know what the memorial commemorated. Thanks to the magic of PhotoEditor and the internet, I can fill in the details. 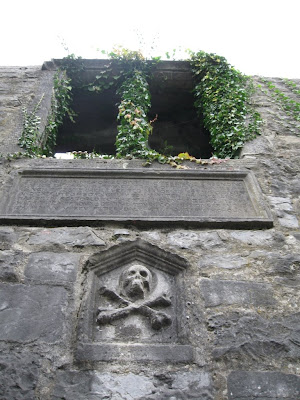 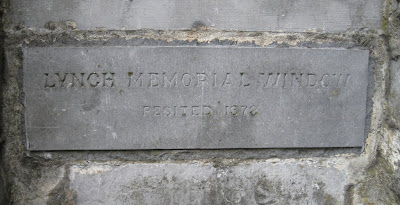 "The Lynch Memorial Window"
As legend has it, this window marks the spot where the Mayor of Galway, James Lynch Fitzstephen, hanged his own son in 1493. His son Walter murdered a Spanish guest of the family, and gave himself up to his dad, Galway's mayor and the town's chief magistrate. Everyone in town liked Walter. When his father convicted him and sentenced him to death, a mob demanded Walter's pardon and tried to rescue him. The Mayor, Walter and the bailiffs couldn't reach the place of execution because of the large pro-Walter crown demanding his release. Enraged, the Mayor took his son inside their nearby house, took him upstairs, tied a rope around his neck, and threw him out the window. Walter hanged to death in full view of the crowd below. The legend (several different versions of which I found online) serves to show that "the enforcement of the law was more important than the bonds of family." Some people believe that the word "lynch" comes from this event. 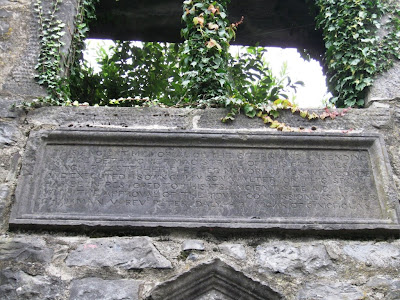 "This memorial of the stern and unbending justice of the chief magistrate of this city, James Lynch Fitzstephen, elected mayor A. D. 1493, who condemned and executed his own guilty son, Walter, on this spot, has been restored to its ancient site A. D. 1854, with the approval of the Town Commissioners, by their Chairman, Very Rev. Peter Daly, P. P., and Vicar of St. Nicholas." 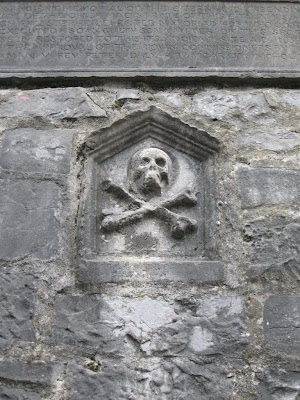 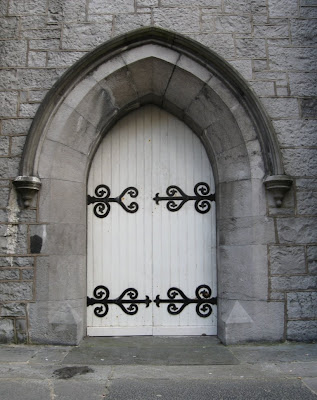 Cool looking door located nearby
Posted by Chapmaster at 7:19 PM

Where in Galway was this site? Neat historical tidbit!