Whatever street we were on in Belfast must have been a designated "protest street" because when we went by later in the day, there was another demonstration going on. This one was more like a parade, as there were a lot of children marchers and banners. The chants were not in English. Our tour guide said they were advocating for traditional Irish (Gaelic) to be taught in schools.

Since we were in Belfast, Northern Ireland, UK, I don't think spoken Irish was required in the schools. However, down in Cork (and maybe the rest of the Republic of Ireland) I think that every school kid learns Irish and actually has to take an Irish proficiency test on the college entrance exams. Just as a casual observer, it seems to me that the language issue is deeply rooted in the politics and history of the island, rather than in education or language. Even in Cork where everyone had studied Irish, very few people actually spoke it. Preserving the native language seems to be more of a point of national pride or national heritage...which I think is a good thing in a place with such a fascinating and complex history. As to whether school kids should be made to learn Irish, who knows? 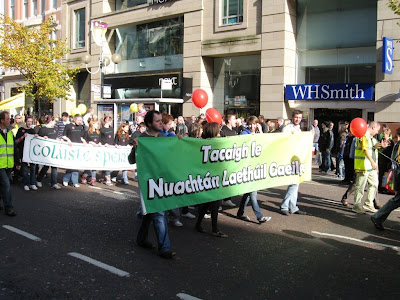 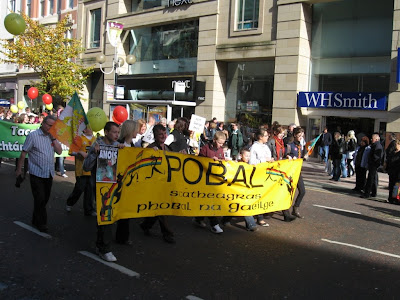