I've generally found that the motto "prepare for the worst, hope for the best" is a good strategy to have in mind when traveling. It is essential to be aware of the "worst case scenario" because so much is out of your control. Oftentimes you have to improvise to prevent the worst case scenario from coming true. For example, when I arrived in Cork several weeks ago, it was past midnight on a very chilly night. I soon discovered that sheets, pillows, blankets, towels, etc. were NOT provided with the apartment. So I spent a very cold night sleeping in piles of my dirty laundry to avoid freezing to death.

Andrew has already found out the consequences of not preparing for the worst...when he left for Europe, he didn't bring confirmation of a successful wire transfer to show he had paid his rent (which was required by our landlord). After arriving in Ireland, he discovered that because of a typo at Bank of America, the wire transfer never went through. He didn't really make a sincere effort to get things straightened out until the apartment manager threatened to kick him out. So Andrew, who left himself with very few options, had to walk all around the city withdrawing cash from different ATM's for 3 days, getting a little bit of cash out each time to circumvent withdrawal limits. Thus he was able to avoid the worst case scenario of homelessness.

But the best improvisation was by some Polish dude who's name I can't remember. My friend and fellow study abroad-er Tom had quite a harrowing experience last Sunday. He had been wanting to go skydiving all summer, and finally got the chance last weekend. Since it was his first jump, Tom was paired up with the Polish dude, who had done something like 4,000 jumps. They jumped out of the plane and everything was normal at first. However, there was some sort of malfunction when Polish dude pulled the cord to open the parachute. So, as Tom plummeted towards the Earth, I imagine he could see all the other jumpers open their chutes and stop free-falling. Luckily, Polish dude implemented his back-up plan, pulled out his knife, cut away the crappy chute, deployed the back-up and saved the day. As they were gliding down, he told Tom, "It's OK, we're going to live now" (or something like that...I'm sure Tom will correct me). So out of the four of us, Polish dude was the only one who had a back-up plan. And he's not spending $35k+ per year to go to school. 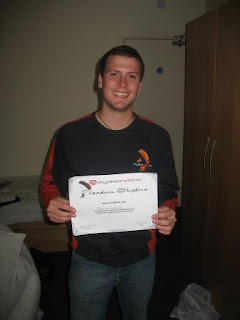 Tom almost died and all he got was a free t-shirt. Even people who didn't almost die got the certificate. This woman's parachute didn't open, and she survived, along with her baby!
Posted by Chapmaster at 7:51 PM