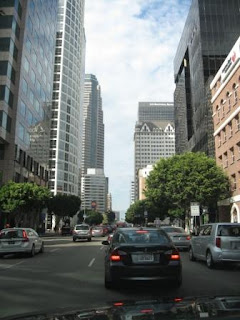 I loved working this summer in LA. However, there was one day when I was a bit bored, and thought to myself while walking into the office, "Maybe there will be an earthquake today to make things a little more interesting." And sure enough, at 11:36am that day, LA was hit by an earthquake. That's some psychic shit.

I didn't feel the quake because I was walking outside next to loud traffic and didn't realize what was happening. But everyone back up in the office got quite a scare. Up high 15+ floors the office was rocking and rolling. People got under their desks, stood in doorways and said that they could see the walls moving. So that was Exhibit #1 showing that I am a bona fide psychic.

N0w, on to Exhibit #2. A few coworkers and I had a end-of-the summer celebration which included a rousing game of beer pong (at my residence at the luxurious Lucretia Gardens) and a visit to the Dodgers game. 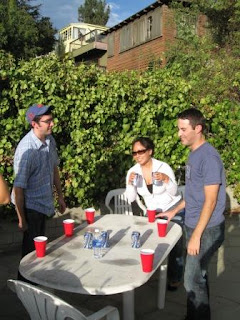 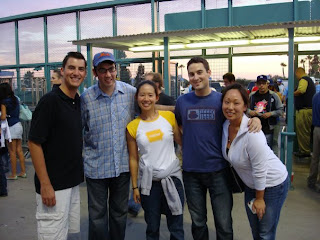 Posted by Chapmaster at 4:17 PM