One of the coolest things I've done so far in Ireland was walk across the Carrick-a-Rede Rope Bridge. It's on the northern coast of Northern Ireland, in County Antrim near Ballintoy. The bridge connects the mainland to a very tiny island which was used for salmon fishing. Now the bridge is a tourist attraction and for about 5-10 bucks you can walk across. 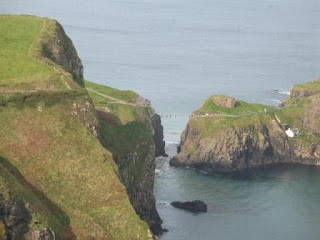 This picture was taken about a mile away from the bridge. You can barely see the bridge spanning the gap and the little people walking across it. Zoolander reference: "What is that, a rope-bridge for ants??" 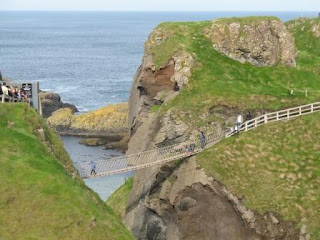 Closer shot. They say that no one has ever died from falling off the bridge. One dog has fallen off. He probably didn't make it. Now dogs aren't allowed on the bridge. 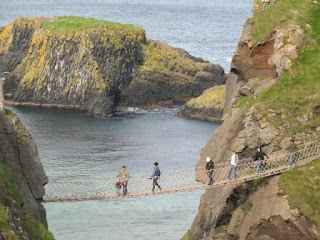 No more than 8 people are allowed on the bridge at a time. For 2008 they put up a brand new bridge. The bridge is taken down each November, and put back up after winter in March or April. 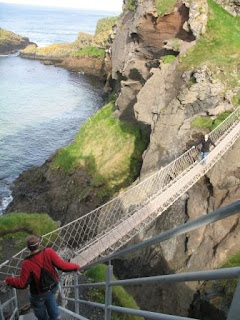 You have to walk down a set of steep steps to get to the bridge. This is when I first realized how freakin' high the bridge is. People of all types were going across the bridge: small children, grandmotherly looking women, etc. After spending 10 bucks and seeing them go across, I knew I couldn't chicken out. 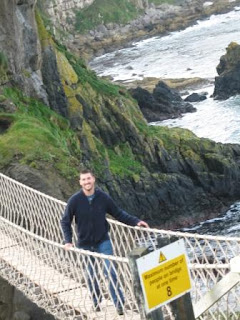 Here I am on my way over to the island. The bridge was surprisingly stable, although it did bounce up and down a bit. I just looked forward, held on tight and walked as fast as possible. Up to the 1970's the bridge only had one hand rail, no netting, and large gaps in between the wooden slats. 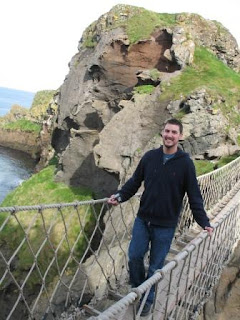 Here I am walking back to the mainland. They say sometimes people cross over to the island and get so scared that they can't cross back over the bridge. These wimps have to be taken off the island by boat. I think it would have been alot scarier if it had been raining or windy out. 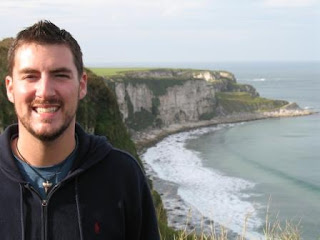 I lived.
Pictures by Andrew.
Posted by Chapmaster at 6:30 PM

bold move for a guy that doesn't like heights. awesome dude!

Should have heard him on the Ferris wheel...

haha...my version of the Ferris wheel events will be featured soon enough...