The Exciting Conclusion... (alternatively titled: "There comes a time, when we heed a certain call..."

Yesterday's post ended in a cliffhanger. When I last left you, I had just hurled a clumsy, albeit awesome insult/classic '80's reference at Tom. I was unsure how he would respond, and truth-be-told, I didn't think I could handle whatever comeback he'd have due to my inferior insulting skills (see below).

My insult attempt went something like this. "Hey Tom. You look like Diana Ross in the 1985 'We are the World' video. What's goin' on with those jumbo headphones dude?" 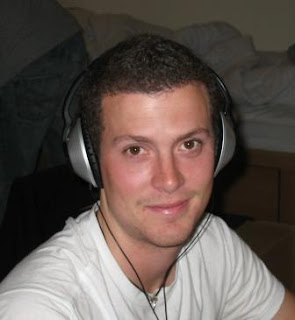 Luckily for me I had just recently seen "We are the World" on VH1's Pop-up Video. The video features the biggest music stars of 1985 all coming together to sing a charity song to benefit famine victims in Africa. However, upon closer examination of the video, you will see that it is actually just a commercial for REALLY GIANT HEADPHONES! (go ahead, take a look at the video). These supposedly cool (in 1985) people, Lionel Richie, Bruce Springsteen, Kenny Rogers, Bob Dylan, Cyndi Lauper, Diana Ross, etc... basically rock out on screen with their gigantor headphones...for a full 7+ minutes.

When he heard my insult, a funny thing happened to Tom. For once, he was just silent. He looked at me. His face was expressionless...an eerie quietness came over the back of the bus as the Irish countryside raced by. Still silent, Tom blinked...more silence. As the silence stretched on, I began to realize that three things were running through Tom's mind: 1. How dare anyone insult my mega-headphones, 2. What the fuck is he talking about?, and 3. Do I really look like Diana Ross? I had shut him down!

The image of Diana Ross with her giant headphones and equally giant hair bobbing to the music that immediately came to mind when I saw Tom's gigantor-phones. My insult had worked...not just because it was true, but because I was able to simultaneously confuse him with my obscure reference, such that he wasn't really sure what I was saying, and shock him into thinking he looked like Diana Ross. My insult completely shut him down. I had won the battle. I was victorious. Tom turned around in his seat with not even a feeble "shut the hell up" uttered. As he conceded defeat I was gladdened, but somewhat disappointed...a little saddened that the master had fallen.

The Epilogue: A funny thing has happened since that fateful day. Basically, my life has been taken over by the "We are the World" video. The video helped me defeat the master, but it I've had to pay a heavy price. I've watched the video, and have forced other people to watch it, about 1,000 times on YouTube. I've memorized the order of the soloists and most of their lines. I can tell you that Diana Ross first appears at 1:34, that Kenny Rogers likes to sing with his eyes closed, that Bruce Springsteen looks very constipated at 2:19, that Steve Perry from Journey has an awesome solo at 2:32, that a Dwight Schrewt lookalike appears at 4:23....sadly, I could go on and on. The song runs constantly though my head. I race home from class to watch the video over and over. I might as well set the video as my homepage.
A local pub we like to frequent has a digital jukebox. Shortly after I defeated Tom, we were at the pub playing pool when I found none-other-than a track of "We are the World" listed. I quickly put money in the jukebox and filled that unsuspecting Irish pub with the sweet sound of 1985's biggest (and most charitable) stars. Now, I must play that song every time we return.

As a final sign of my dominance over Tom, Cyndi Lauper recently came to our college town to perform a concert. As you know by now, Cyndi Lauper's prominent solo in the video begins at 2:56. It was unbelievable. Just mere days after my victory, one of my protectors from the "We are the World' video was traveling halfway around the world to celebrate with me. There are no such things as coincidences in life.

Life has calmed down here; it has been several weeks since all the excitement. Now I reign supreme, with my band of 1980's charity singing superstars always at my side. Should Tom ever act up and say something like "you look like someone threw up 1986 and got it all over you", I need only clutch my ears, bob my head and start singing "We are the world....we are the children" and me, Diana, Kenny, Bruce, Bob, Stevie, Lionel, MJ, Dionne, Woody, Steve, Huey, Cyndi, Paul, Billy, Harry, Ray and all the others put Tom in his place.

(Tom is actually an early supporter and avid reader of this blog, so this is all in good fun...as long as he doesn't step outta line.)
Posted by Chapmaster at 3:42 PM

HAHAHAHA. Oh Chapmaster, you are just too hilarious and never fail to entertain.

Amazing, Ireland (and its many splendid adult beverages, I assume) has left Tom so dull-witted that he can't keep up with the notoriously slow Chapmaster.
I can only hope that when I visit for Thanksgiving that this "We Are The World" trend will still be going on.