In yesterday's post, I featured our Irish Thanksgiving celebration. Here's one unfortunate incident from that evening that I feel is my duty to report to everyone. (this is a dramatized version...fact checked by AS himself)

Many people tried very hard to make our Irish Thanksgiving successful...as close a substitute to an American Thanksgiving as possible. Matt and Dan spent virtually the whole day cooking, after having spent the days before Thanksgiving planning and buying hard-to-find ingredients. Other members of the group lent their apartment space, cooked dishes at home, assisted with cooking, or brought other items for the feast. For example, as I eluded to in the first Thanksgiving post, I brought the very popular dinner rolls and soda. At about 8pm, everything started coming together. The apartment was filled with warmth and the smells of a Thanksgiving feast, food was set out on the table...people began realizing that we'd have an actual, authentic, Thanksgiving dinner. There was excitement and jubilation in the air. Everyone's hard work and effort was going to pay off in a cornucopia of holiday deliciousness.

We all took our seats around the table. Someone suggested that we say "grace" and someone else playfully suggested that we all hold hands while doing so. Andrew, who had earlier called and interrupted the cooks about 75 times to get directions to the apartment (before arriving to dinner late and not bringing anything [aside from a free lesson in how to sing show-tunes from "Les Mis" and "Beauty and the Beast"]), stood at the end of the table. Dan, the patriarch of the evening (since he carved the turkey), volunteered to lead us in prayer.

Everyone joined hands, closed their eyes and bowed their head. Dan began with something along the lines of..."Dear Lord, We thank you for bringing us together today and providing us with this bountiful feast...." Just then, during the middle of the prayer, Andrew interrupted, shouted something rather inappropriate. I was confused and taken aback. I opened my eyes to see Andrew peeking his eyes open and smirking...looking around the circle to see if anyone laughed at him making fun of Dan's prayer. No one was laughing. No one had looked up. There was silence. I glared at Andrew and slowly shook my head side-to-side. After a period of more awkward silence, Dan recovered and continued the prayer. The prayer ended and we commenced feasting.

Here is a dramatization of what happened, and what everyone was thinking...(click to enlarge) 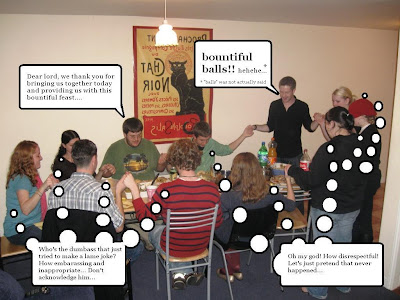 After dinner, Andrew discreetly asked me about his prayer-joke. He says that (for some odd reason) he didn't think the prayer was "serious"...that he wasn't actually trying to mock it. Nevertheless, he admitted that it was pretty awful that it sounded like he had made fun of the prayer and/or Dan as he was saying the Thanksgiving prayer. I replied, "Well, that's what happens when you try to be a jackass and make a joke out of everything. Sometimes the class-clown screws up. At least they were nice enough to ignore you."

Andrew nodded...but I'm not really sure if he fully understood what I was saying.
Posted by Chapmaster at 1:03 PM

Sure Andrew makes a joke out of everything but I have to admit, it looked pretty funny to me that you guys were all standing there with hands joined presumably praying. I don't think I would have loudly interrupted the prayer but I definitely wouldn't have participated.

perhaps you'd even wear your Vladimir Lenin hat to the prayer in a silent protest...

"...Vladimir Lenin..." Although I know you are just joking, this is reminds me of how we often have only the most cartoonish understanding of important ideas. Thomas is not religious=Thomas is communist. As I am finding out here, there is even a huge diversity among communists, not just socialists or Europeanists.

Appropriate? How about the time that you got kicked out of a bar for pushing a woman, Mr. Harvey? I didn't realize that your knowledge of all-things-worldly included "woman beating."

Sounds like you guys are ready to come home. Getting on each other's nerves?

no, no. as Andrew likes to say, i like to "throw him under the bus" every now and then. it makes for some entertaining situations.

however, i do want to emphasize that the original post (which was taken down) was much more hilarious that this edited version. the current version was heavily edited in order to appease Andrew's insistence on the "truth."

and if you're referring to tbh1910, that is just his normal cantankerousness

Dude. Which imposter "JBeems" commented on this? For it was not ME, the one and only JBeems. I think you've got some shenanigans going on with this blog Chapmaster...

sorry real JBeems. This is at least the 3rd case of an imposter posting comments under someone else's name.

looks like someone took a course in Advanced Douchebaggery at their ivy league-wannabe university of the South.