Before leaving Ireland, I decided to make an impulsive, last-minute trip to London since I had some free time and just enough money to last for 2 days. I figured this would be my last chance to visit London for quite a while, so I should take advantage of the opportunity, however brief the visit would have to be. 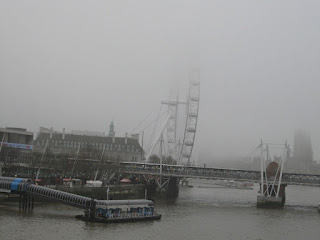 When I arrived in London, the weather was foggy, cold, and generally crappy. Here, you can only see halfway up the London Eye (giant ferris wheel). I did not ride the Eye. I generally don't like ferris wheels. Andrew and I rode the sightseeing ferris wheel in Belfast. Needless to say, he and his beloved camera were almost thrown out of our little car (by me) and sent plummeting to certain death for 1. rocking our car, 2. pointing out how the door wasn't closed correctly and 3. generally being an ass. 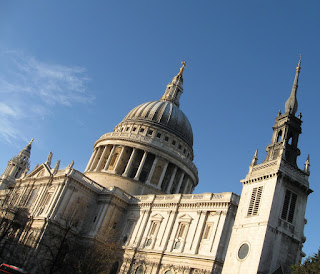 St. Paul's Cathedral was one of the stop on our tour bus route. Before I left Ireland, I asked around school to see what people would recommend that I see considering I'd be there for about 48 hours and really had to prioritize. People recommended that I do one of the hop-on, hop-off bus tours since that way I'd be able to see alot of stuff in a short amount of time. My general strategy was to just shoot the landmarks through the bus window as we rode by. However, I really liked St. Paul's, and the weather was nice, so I decided to hop-off and take some better pictures. I didn't go inside though... 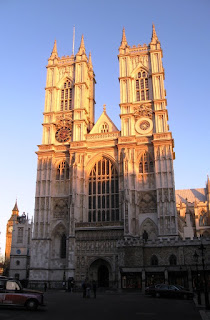 One of the few places I did go inside was Westminster Abbey. It was really cool...lots of kings and queens, famous people and others are buried in there. I saw the coronation throne and stood where Queen Elizabeth II was crowned. My high school friends will remember that I used to openly profess my dislike of the British Royal Family, as well as NBA basketball and chapstick. After living in Michigan for a winter I have become a seasonal chapstick user, I followed the Lakers playoff run this summer in LA and now I've visited Westminster Abbey. I guess I've gone soft. 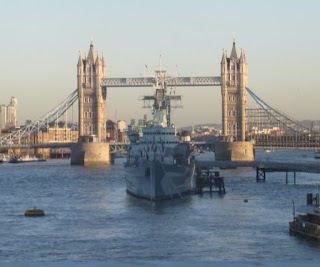 I snapped this picture from inside the tour bus. 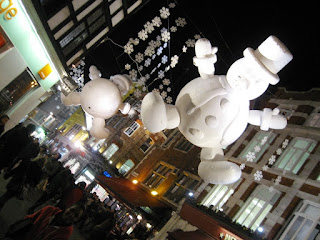 Here are Christmas decorations on Carnaby Street, near Soho. 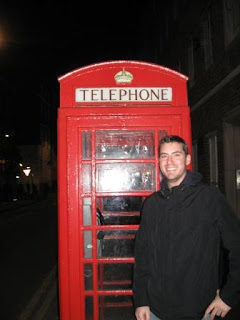 I had this picture taken just to prove that I was actually in London.
Posted by Chapmaster at 1:40 PM