In class on Wednesday, the LCD bulb/lighting element decided to crap out on ole Bessie Lou (my laptop). Basically, about 5 minutes after I start her up, the whole screen goes about 98% black. I say 98% because if I shine a bright light on the screen, I can see that everything is still there. I was initially concerned that I had lost some schoolwork and photos. Luckily, it only seems to be a hardware problem.

Since I am in the law business, I will assess blame for this mishap in percentage of fault.
-) 1% blame - me, for probably dropping or handling ole Bessie Lou too roughly once or twice...
-) 32% blame - Michael Dell of Dell computers because, after-all, his name is on the computer...
-) 33% blame - Andrew, because he and I had a discussion the day before about whose computer is better. At the time, I believed ole Bessie Lou was clearly superior because Andrew's computer is so loud it sounds like a Harrier jet getting ready to take off from the deck of the U.S.S. Nimitz. Also, his computer gets hotter than Daisy Duke in her short-shorts and is liable to burn your lap or anything else it's sitting on.
-) 34% blame - Tom, when he saw I was having computer problems in class, he cursed my computer and play-kicked it. He has weak ankles, so I know the kick didn't harm ole Bessie Lou, but the curse did. Tom was unhappy that I would not publish some of his comments on this blog. I told him that if his comments met the Chapmaster standards of excellence, I'd allow them to publish. He was unsatisfied with this and cursed ole Bessie Lou again.

One of my team of computer experts, (step)brother Chris diagnosed it as a possible loose wire, and sent me instructions on how to open up the keyboard and "wiggle it." I think the chance that I can sucessfully open up ole Bessie Lou and operate on her without causing more harm is about 1%. So I'll just tough it out until I get home in a few weeks. Please excuse any misspellings or grammatical errors because I can barely see what I am writing. The internet says it will cost $0-$300 to fix Bessie Lou, but until then, I have to improvise. 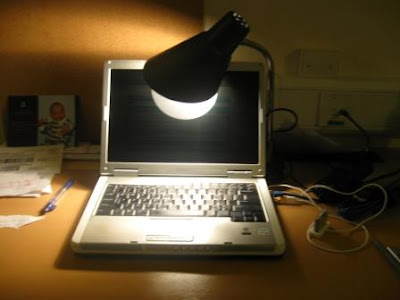 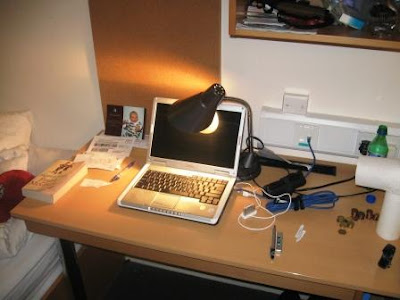 Posted by Chapmaster at 3:45 PM

If nothing else, I believe in karma.