Here is my illegal picture of Michaelangelo's "David" in the Galleria dell'Accademia in Florence. I got yelled at while taking the picture because, apparently, taking pictures of the statute is a no-no. 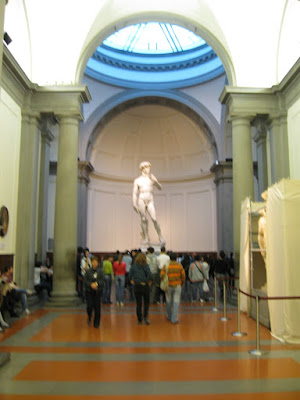 It's common for pictures to not be allowed in museums, but I didn't see a sign or anything. Furthermore, there were many other people snapping pictures of David, so I whipped out my Canon and snapped this picture. Just after taking my first photo, a long distance shot of the statute and gallery, a museum staff lady came running down the gallery shouting at me that I shouldn't be taking a picture. She shook her finger at me...her eyes were filled with anger and disappointment. "No photo!" she shouted. This struck me as odd, because as I was being scolded like a naughty kindergartener, literally dozens of other tourists were snapping away with their cameras, carefree and unhindered.

Let's look at a breakdown of my illegal David picture: 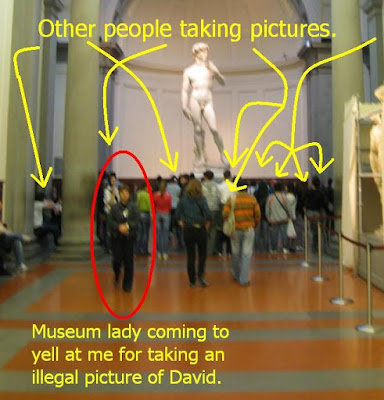 1. note the overall blurriness of the photo. subconsciously I could tell that trouble was coming so I rushed the picture.
2. notice the throng of literally dozens of other visitors at the feet of David, taking pictures to their heart's content
3. the "no photo" lady turns away from the dozens of violators, and hones in on me. I guess I'm an easy target.
4. the "no photo" lady has a stylish jean jacket uniform, so I didn't think she was a museum employee at first.
5. she walked clear across the room to yell at me, as I was isolated alone in the aft of the gallery, and she then activated the museum's automated loudspeaker warning, telling people to not take pictures in many languages. She gave me a nasty glare for good measure.

My response was to join the safety of the crowd up front and take some more pictures. I was able to snap off this close-up before another jean-jacket clad enforcer barked at me again. So I put the camera away. I worked for a few years as an usher at professional baseball and football games, and occasionally had to yell at people for doing stupid things...like smoking in the elevator or blocking people's views with an umbrella. My polite requests would often be met with contempt or flagrant disobedience. At that point in my life I learned an important life lesson: people just don't like to be told what to do. So I guess I shouldn't be too critical of Ms. Jean-Jacket...lest I have become the jerk smoking in the elevator.
Posted by Chapmaster at 9:18 AM