My Thanksgiving, in pictures: 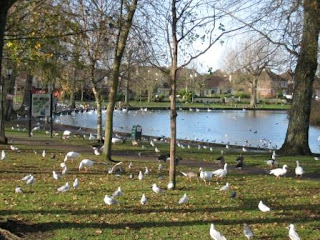 I began the day by walking about an hour to go pick up a package from the An Post (Irish post office) sorting facility. Apparently, the post office will attempt to deliver a package once, and then it is sent away to a far away warehouse, and then sent back. I actually had a nice walk to the outskirts of town, passing the Lough along the way. Lough is the word for lake, and is pronounced like "lock." There was an unbelievable amount of birds hanging out at the lake. If we had been unable to get a turkey, we surely could have captured a couple of good ducks, swans and some geese for Thanksgiving dinner. 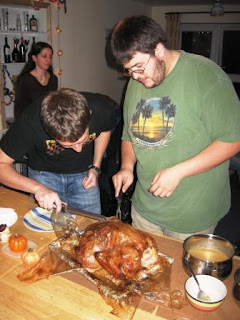 A group of us Americans decided to have a real Thanksgiving feast. The effort was spearheaded by Matt and Dan. Here, they are inspecting the turkey as it has just come out of the oven . This was the first time anyone present had cooked a turkey. Matt and Dan poked at the turkey, wondering where all the stuffing went. 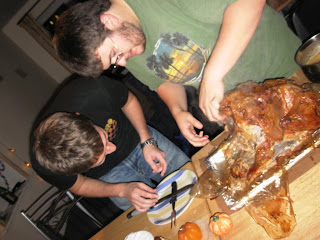 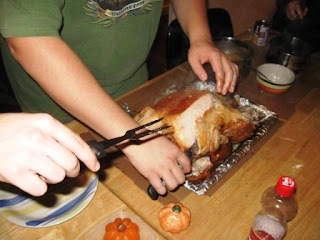 Dan had the honors of carving the turkey. 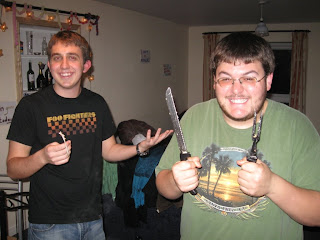 Here, Dan becomes drunk with power and the excitement of carving his own turkey. 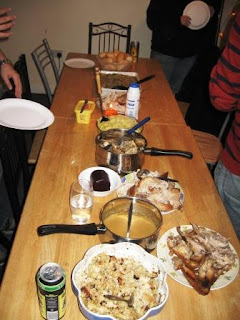 The feast, complete with turkey and all the important side dishes. It was actually very good. I had been skeptical earlier in the day, telling people back at home that I had low expectations. But I was wrong to doubt them, as it turned out delicious. 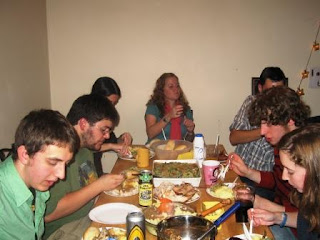 Here, we devour the feast in a matter of mere minutes. I very graciously brought the dinner rolls and 3 bottles of soda. By all accounts, the rolls and soda were universally loved by everyone.
Posted by Chapmaster at 5:59 PM

Looks like a great Thanksgiving! I hope you didn't kill any native Americans to celebrate, even though you did participate in and encourage in the future the murder of innocent turkeys. Check this out; it turns out the first pilgrims to celebrate thanksgiving were French.
http://www.nytimes.com/2008/11/26/opinion/26davis.html?_r=1

Who got the wishbone?

The French were also kind enough to give us this gem:

Matt (my roommate) and Dan did the honors...and Matt won. There's no telling what Matt wished for, but he's from Jersey, so perhaps he wished for a new jogging suit.