In Istanbul, we stayed in an "old town" area (I can't remember if is was called Old Town, or something else) near two of Istanbul's most prized landmarks: The Blue Mosque and the Hagia Sophia. 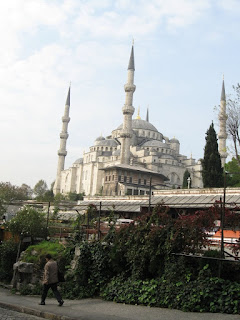 The Sultan Ahmed Mosque ("Blue" Mosque) is the national mosque of Turkey as still operates as a mosque today. On our first morning in Istanbul, we were woken up at 5:45am by the booming call to prayer coming from the loudspeakers. The loud singing echoed throughout the streets. 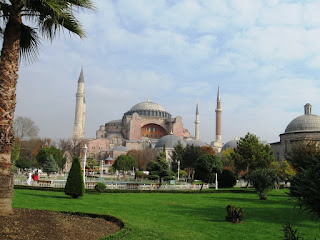 Directly across from the Blue Mosque is the Hagia Sophia. It was originally a Christian church, then became a mosque, and was turned into a museum by Atatürk. The park between the two buildings is the Sultanahmed Square (I think...I'm not real solid on these historical details. I am loosely relying on Wikipedia and my memory). This is also the site of a Roman Hippodrome. 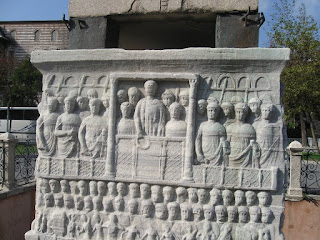 The surrounding square/neighborhood has a handful of ruins and relics from past civilizations that occupied the area. This one had Greek or Roman writing on it. 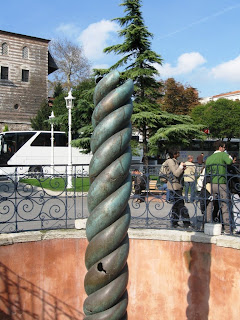 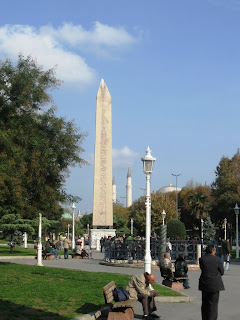 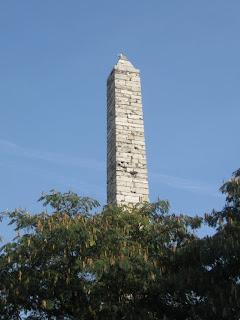 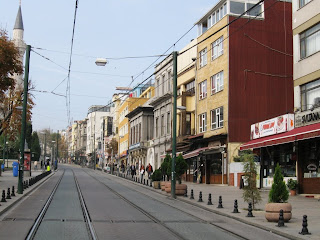 This was the nearest big street by our place. It had many shops, street vendors and restaurants. Many of the restaurants in Turkey had very aggressive "promoters" out on the sidewalk who tried to get you into their place. We only got pulled into one place, only after they promised us free beer and coffee. Alas, it was the Turks who got the last laugh. That story will come later... 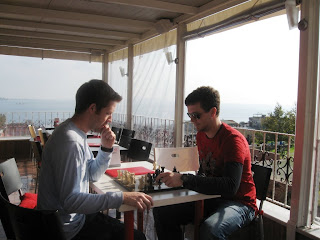 The rooftop of our hostel had a great terrace with a bar and cafe. It also had a great view, overlooking either the Bhosphorus River or Marmara Sea.
Posted by Chapmaster at 1:24 PM

About the free beer and coffee: was there also a three card monte game going on out front?

About the picture of Tom and Andrew playing chess: Oh, to be a witness to that matchup. Historic, I think sums it up the best.

you could move a mountain with the brainpower being exerted here.

A mountain of feathers.