One of the coolest things we did in Istanbul was get a Turkish shave. We were walking down a back alley passing a barbershop, when a barber cutting a man's hair waived us in. After thinking about it for a while, Andrew and I decided to go in and get shaves. (Note: Tom had already gotten a shave separately at another shop, so he just sat and watched. It was funny... a few weeks before the trip to Turkey, Tom decided to not shave, so he'd have alot of beard growth for the Turkish barber to shave off. Unfortunately for him, 3 weeks of not shaving produced less facial hair than most 10 year old boys in Istanbul were sporting.)
The owner of the shop spoke broken English...everyone else was speaking only Turkish. I pointed at my beard and made a "scissor" motion with my fingers to try and indicate I wanted a shave. The assistant barber quickly went to work and shaved my face with a straight razor. But that was just the beginning.

After the shave (and brining me a free cup of Turkish coffee) my barber put some sort of mud mask on my face. My "scissor" motion must have indicated that I wanted a haircut too. While the mud mask was drying, the barber went to work on my hair. He called over the shop owner, as well as another man in the shop, and they loudly discussed my sideburns and something about the back of my head (in Turkish). I realized that this was the most attention anyone had ever paid to my sideburns. Then he went to work cutting, trimming, shaving, etc., seemingly going hair by hair. After the shave, mud mask and haircut, the barber kept me in the chair for another 1.5 hours. He waxed my nose pores, trimmed my nose hair, tidied up my eyebrows, burned off my ear hair with a lighter, put on a Spice Girls CD (the only music in English they had), had the barbershop helper kid run a massager on my arms and legs, put on aftershave, blow dried my hair, put gel in it, reinforced my hairdo with hairspray and doused me with body spray. Oh, and I got another cup of coffee and a cup of tea. 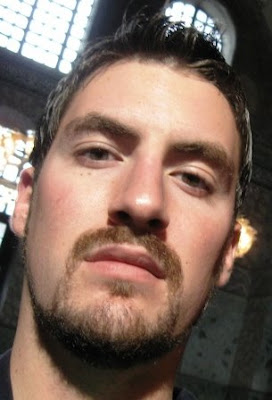 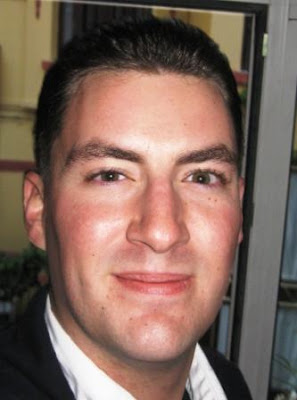 Before and after pictures showing the effects of my shave. Notice the Woodrow Wilson hairstyle the barber gave me.
While this was going on, the other barber was doing pretty much the same thing to Andrew in the other chair. The one exception is that they "threaded" his eyebrows and other hair on his face. It looked funny, seemed to cause him alot of pain, and therefore was really hillarious. 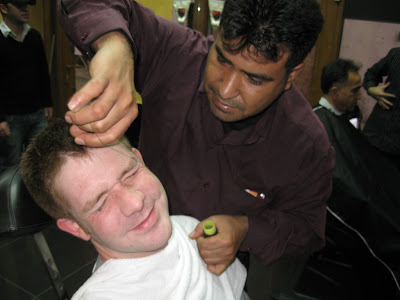 Tom and I discovered (and you can see) that Andrew's face is actually 5 shades whiter without his permanent 5 o'clock shadow.
The whole experience took about 2 hours and cost us about $35 each...it was well worth it. The guys in the barbershop were great. They were friendly, funny and seemed to like having us there. I know this is probably related to the fact that we were "high paying customers," but their hospitality was probably the best part of the trip. 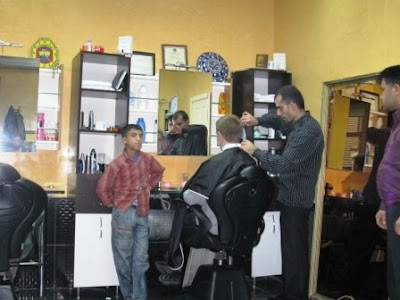 Posted by Chapmaster at 5:27 PM

Wonder what that amount of personal service would have cost here in the USA? You need to import some of those guys so i don't have to go to Great Clips anymore!