IMPORTANT! If you haven't read the posts from Oct. 20th and Oct. 21st, you should do so before reading this...or else this will make absolutely no sense!!! Basically what happened a few weeks ago was that supposedly super-fashionable Tom worn some really dorky monster-sized headphones, and I successfully dissed him with the help of the top music stars of 1985.
----------------------------
The "We are the World" saga continued after I had declared my victory over Tom in the Tuesday, Oct. 21 post. When we saw each other in the Centra market before class that morning, Tom seemed amused at the post and conceded that it was generally correct in its assessment of my complete victory over him. He also issued a veiled threat. He said something along the lines of "just wait, I have a big surprise in store for you" or "you better watch out...I'll get you back soon." OK, so maybe it wasn't so veiled. I've heard Tom gush about different frat house pranks from his college days involving toothbrushes, toilets, and such, so I was mildly concerned.

Life went on as normal for the rest of Tuesday and Wednesday, which meant I pretty much two full days of class. At some point during the day on Wednesday, Tom challenged me to a darts game that night (301-end on doubles, best of 7). He said it would be a 9pm and a local pub called The Gallows, which has become my favorite local pub (especially since they have "We are the World" on their jukebox"). Tom also said that I should "be ready" because "it would happen."
This is what happened... 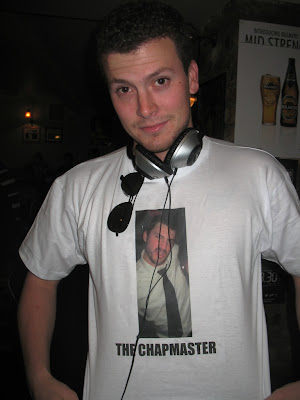 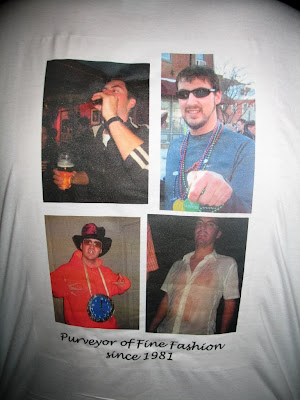 Tom arrived wearing his huge pair of monster-phones and a custom-made t-shirt complete with 5 unflattering pictures of me and the saying "The Chapmaster: Purveyor of Fine Fashion since 1981." The mention of "1981" was a subtle shot at my age, while the 4 pictures on the back of the shirt were specifically chosen to demonstrate my fashion shortcomings: a shot of my Euro-sweater that I'm accused of wearing too much, me at St. Louis Mardi Gras, the time I went as Flavor Flav for Halloween, and me at a party where it became fashionable to dump beer on me. Tom vowed to wear the t-shirt whenever we would go out...and even wore it at class the next day.

The older Irish gentlemen having a pint of Guinness at the pub looked on in quiet confusion, when they realized that I, the subject of the t-shirt, was standing right next to Tom. Or were they confused as to whether why someone would wear such freaking huge mega-headphones? We'll never know. 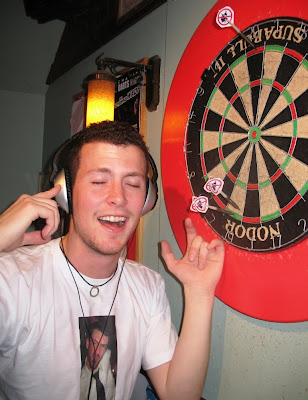 So Tom seemed to have gotten some form of revenge by way of embarrassing me and pointing out my own fashion flaws. But could he seal-the-deal by defeating me in our darts playoff? After all, I was riding a 6-1 record in 301 coming into the contest...

Stay tuned, because something totally unexpected and magical happened as I got a visit from an old friend and some help from "above." But would it be enough? You won't want to miss the exciting conclusion....
Posted by Chapmaster at 8:00 AM

Who is this Tom fella? He is in your posts way too much. It is a little dangerous that your blog name combines the words "Chaps" and "Master," but to dominate your entries with one man (except for that stylish Irish man with the Black Bush) and pics of San Francisco . . . very dodgy.

Maybe you should just go by Perez Hilton now.

I'll admit Tom's revenge was sweet but perhaps it was somewhat bittersweet because we all know the Flava Flav costume was by no means a fashion faux pas and more like a fashion homerun and by putting the picture on his shirt he just showed all who would view the picture that you don't need to follow the trends because you set them.

Wow, that is an impressive and clever escalation. It was predictable that things would go this way. It is always dangerous to cross a really smart drunk who has too much time on his hands because he is currently spending the first semester of law school at an undergraduate institution in Ireland.

anonymous #2: yeah, i realized the unfortunate pairing of my San Francisco pics and the "fruit stand" header. i too thought tom's shirt was a little questionable. it opened him up to insults like, "hey Tom, i didn't know that you wanted me all over your back" and so forth.

jbeems: i couldn't have said it any better. i think i had the most talked about costume that Halloween and it took about 4 minutes to make.

Chapmaster, there are officially now two tbh1910s. I did not make the correction comment.