The Druid's Altar aka the Drombeg Stone Circle

The Drombeg Stone Circle is one of Ireland's most famous stone circles. It is located in County Cork on Ireland's southern coast near Skibbereen. It consists of 13 remaining pillar stones arranged so that the sun sets directly between the two main stones on the winter solstice. The sight is estimated to have been active around 900 BC. In 1958, a pot containing the remains of a young adolescent was excavated from the center of the circle. In 2008, I captured a picture of a ghost at the stone circle. That picture will come later...here are two without the ghost. 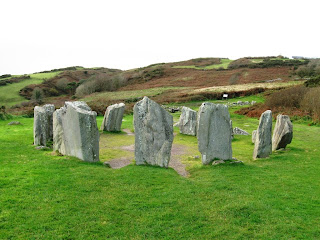 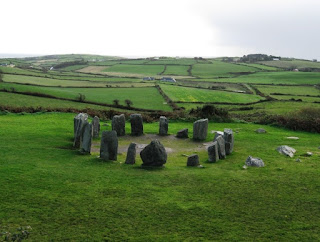 Posted by Chapmaster at 6:35 PM

It's interesting that you say you caught a ghost on film. I was visiting Ireland just this January and was taking pictures of the circle. I took a picture of the offering stone in the middle and had turned around to walk over to the hut and fell on my rear. I wasn't moving at the time. It really felt like something pushed me down. There was a strange feeling the whole time that I was there.

Wow! That's pretty weird. I agree that the place definitely had a weird feel.

I tried to be funny about it in the post, but I really do not know what that is in the picture.