Yesterday's post laid the ground work about The Druid's Altar. Now let me tell the story...

My friend and former co-worker Rhoda was kind enough to come visit Cork during her recent tour of Ireland. We rented a car and drove around West Cork, which covers the southwest corner of Ireland. One of the coolest things we saw was the Drombeg Stone Circle. The stones are placed so that on the Winter Solstice (December 21st, shortest day of the year), the sun sets on a line directly between the two tallest stones, falling over the shortest one, before setting behind a notch in the distant hills. 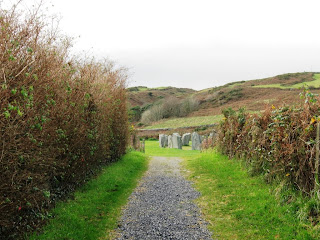 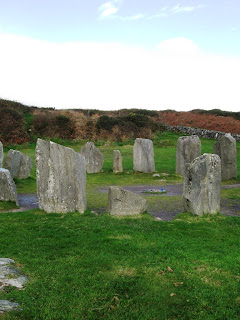 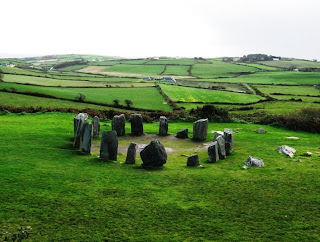 After walking around the circle and other near-by ruins I snapped one last picture. The picture's line of view looks between the two tallest stones, tracing the path the sun travels on the Winter Solstice. I'll call this the "Solstice" picture. We walked back to the car and went on to the next site. Later, at lunch, I was looking through the pictures I had taken on my camera when I noticed something funny on the Solstice picture. Here is the original photo...see if you notice it: 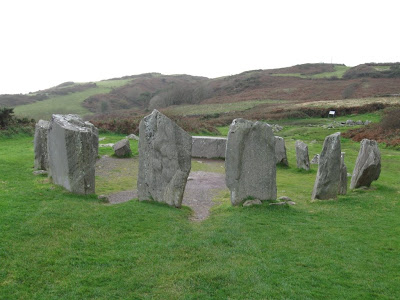 I said to Rhoda. "Do you remember there being any strings or wires holding up the stones?" She said no. Hmmm. I looked and the pictures I snapped right before and after the Solstice photo...no lines. I looked at the camera lens. No lines, strings or smudges. So I came to the only obvious conclusion: I had captured a picture of a ghost! 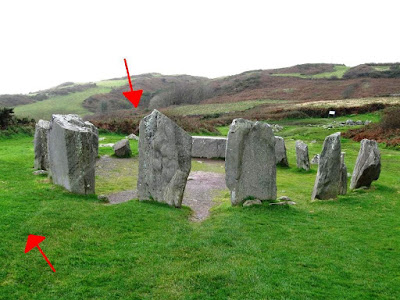 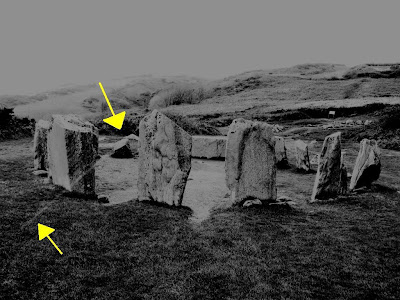 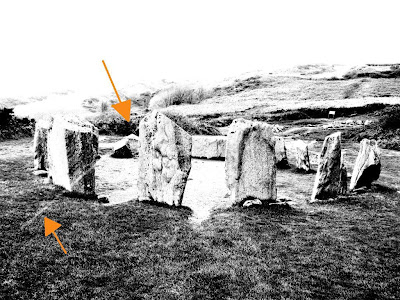 So, I've tried very hard to think of what caused this Druid-line-ghost-finger to show up on my picture, and I haven't a clue. If anyone has an idea, please let me know. All I can think of is that perhaps the ghost-line is pointing me from the top of the highest stone to a spot in the grass where something is buried underneath, and that I should go back and dig it up. In 1958, they found the remains of a prehistoric adolescent in a jar at the center of the circle. Maybe this ghoulish finger is now pointing me to the teen's killer. Or perhaps it's a leprechaun's trick to get me arrested for violating the Ireland Stone Circle Protection Act of 1973.
Posted by Chapmaster at 1:05 PM

The Ireland Stone Circle Protection Act of 1973...look at you, you are studying law!!