I snapped this picture while we were high above Europe, getting close to Istanbul. The 4.5 hour flight from Dublin was uneventful. However, we were forced to sit on the tarmac before take-off for about an hour while the pilot worked out a "technical problem." The "problem" developed just after we were pushed back from the gate.

As you can see, I was sitting right behind where the wing meets the main part of the plane. As we sat on the tarmac, I looked out the window and could see that something was going on with the wing flaps. Then, we heard a loud, metal-on-metal banging noise coming from right below me. It sounded like someone was trying to hammer a dent out of an old Buick. This continued for about 2o minutes. During this time, the guys in the row behind me started speculating that the wing flaps weren't working. The pilot came on the intercom and explained something for a few minutes in Turkish. He translated his message as, " We working problem. Thirty minute." More banging ensued.

Luckily, the Dublin duty-free shop had a sale...mini-bottles of wine were 2 for 4 euros. Even more luckily, I had decided to take advantage of the sale. So by the time we were ready to take-off I was no longer concerned about the dodgy wing-flaps and more concerned with when the beverage cart was going to come by. As the plane took off, the Irish guys behind me kept a running commentary about the status of the wing flaps and whether they appeared to be working properly. I watched with a calm, detached curiosity wondering whether they would indeed work, steadily finishing my 2nd sangria as we shot into the air. 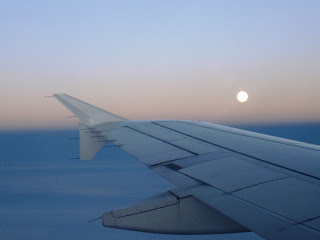 Posted by Chapmaster at 5:59 PM

Dodgy? Who are you?

I think I found your problem...