Our trip to Istanbul, Turkey was amazing. I didn't really know what to expect on the trip...and the weekend far surpassed any of my expectations. The city was full of historical sites and bustling with people. The weather was nice, mostly sunny and not cold. The exchange rate was favorable and there were many exotic goods for sale. Our hostel was cool and had a rooftop terrace bar which served cheap beer and had free breakfast each morning. What more could you want?! But the best thing about the trip was the people. Almost everyone we came across was nice, funny, and very cool.
The shot 11/17/2008: 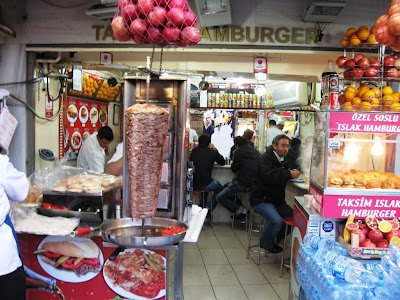 Here is a doner stand near Taksim Square, a very cool pedestrian area in Istanbul. Doner kebab is a popular Turkish fast-food that I've found all across Europe. Basically, meat is shaved off of that meat cylander and put in a pita or tortilla with lettuce, tomato, etc. and sauce. I was first introduced to doners in Berlin last summer at the legendary Chausse Grill. In each city the receipe varies a little bit (ie: in some places french fries are included in the doner). I think my best doner one I got in Barcelona, Spain (followed closely by Berlin, and then Turkey)...the worst was in Galway, Ireland. Yuck.
Posted by Chapmaster at 10:36 AM

see yourself in the mirror?