Note: This is the fourth of four posts about how I triumphed over Tom and won the World Championship of Darts along the way. If you haven't been diligently following along, the first post is on Oct. 20 and titled, "You look like Diana Ross in the 1985 'We Are the World' video," followed by the Oct. 21 post "Exciting Conclusion... (alternatively titled 'There comes a time, when we must heed a certain call...')" and then a Nov. 7 post called "Tom's revenge?" 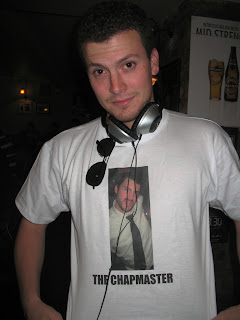 When I last left you, Tom had just arrived at the pub for our best-of-seven "Championship of the World" darts game in a "The Chapmaster: Purveyor of fine fashion since 1981" t-shirt. Oh, and he was also sporting his monster-headphones which started this whole mess.

Since I am a relative newcomer to the sport of darts, it's pretty obvious that Tom believes he's the superior darts player. This was rather foolish of him, as I had a won 6 out of 7 previous games of 301. But then again, looking at this picture, Tom apparently has no qualms about looking or being foolish. (Note: If you are interested in getting a genuine "The Chapmaster" t-shirt, leave a comment to this post saying so and how much you'd be willing to pay for it.)

The rules of the game were simple. After each game, the loser would buy a round drinks. We played "301"....I'm not sure what the real rules are, but we each started out with 301 points, and would then subtract our point total from each throw, eventually getting down to zero. The 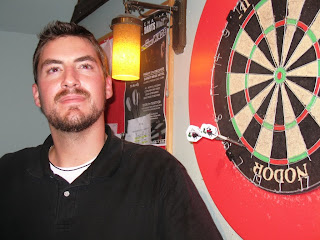 hardest part of the game is that to win you have to finish with exactly zero points. So if you have two points left, you would either need to hit the 2 space, or hit the 1 space twice, or hit the "double 1" space. We played that every-other game would would have to "end on doubles"...ie, if you have 2 points left, you have to hit the "double 1" space to win. For example, if you look at the picture on the left, you can see that I won the first game by hitting a double 7. So I took the lead, 1 game to none. As you can see in the picture below, I quickly won game #2 by hitting a very challenging double 16. Chapmaster 2 : Tom 0. 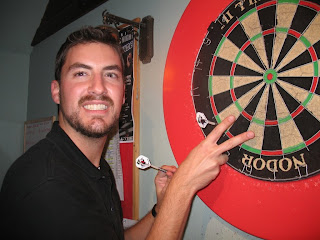 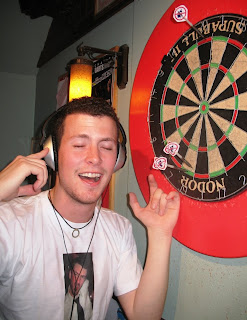 Tom has an impressive come-from-behind win in game #3 while jamming to Celine Dion. 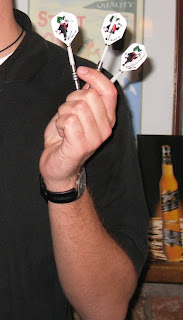 I was beginning to feel exhausted when I entered game #5. However, excitement was in the air as I was on the verge of victory. I paused to think how far I'd come: I waylayed Tom with a wicked dis with help and assistance from my "We are the World" friends, overcame the potential embarrassment of having my fashion shortcomings displayed on Tom's t-shirt, and now had the chance to defeat Tom once-and-for-all in the World Championship of Darts. Little did I know, things would come full circle.

The game started normally, with me jumping out to an early lead. Tom followed, not that far behind. I can't remember the specifics, but we were stuck on the final throw forever. This was a "end on doubles" match and we were both going for the "double 1". (I think.) Since neither of us could hit it, the game kept going on and on until one of us would hit the right space.

Suddenly, from somewhere up above, I heard a glorious shout..."Thanks. Remember, in the end, nobody wins, unless everybody wins. C'mon! One, two....(begin bangin' guitar riff)." I turned around and saw Bruce Springsteen's "Born to Run" video fill the pub's TV screen! I got chills and instantly knew victory was mine. One of my "We are the World" soldiers had magically appeared to see me through to victory. I calmed myself, channeled the inner strength Bruce was sending me, and hit the double 2! I won!!!!!!!!!!!!! When I won, I collapsed in joy as Bruce's singing filled the pub. Then I jumped up and posed with Bruce...notice Max Weinberg playing drums. 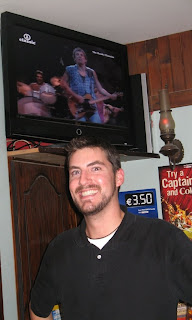 Tom was so upset that he ran out of the pub immediately and hasn't been seen since. However, the police arrived, took witness statements, and were able to produce this composite sketch of Tom. Let us know if you hear from him. 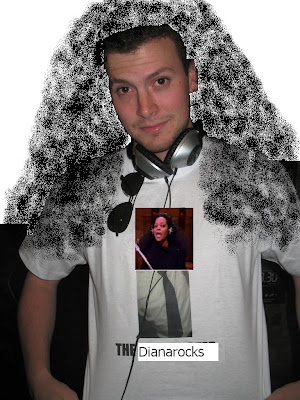 Posted by Chapmaster at 3:56 PM

Amazing game and another fantastic Chapmaster post. Love the blog! When we get back to the states, we can all go to Blueberry Hill and I will kick all of your asses in darts. BTW, in "real" 301 you have to double in and double out but hey, you're just learning.

haha...yeah, we kind of play an improvised version. if you ever come up to Ireland we could play there...

on further reflection I'm not sure that you're right about entering and leaving on doubles. we don't use the 1978 Edwardsville Dart Chapmionship rules over here.